The king of Café Mambo on hippies, hedonism and being in the right place at the right time.

As told to Maya Boyd.
Photos by Danielle Tasca-York.

I came to Ibiza in 1976. I’m from Navarra, near the Basque Country, but I’d met my girlfriend in Benidorm and we’d heard of Ibiza as a hippie and bohemian place. I first worked as a barman at Nito’s in the West End, which was beautiful and so cosmopolitan, with Swedish, English, and a few Dutch. It was like an artist’s quarter. It went downhill but I think in the last two years it’s been coming back.

The first bar I owned was Bucaneros in the bay. It was fantastic! Every night, 200 taxis would arrive outside, and it was a true party vibe, with people dancing on the tables. At the end of the night I’d take the staff to KU, Amnesia or Pacha. KU was a magical place – open air, with the most beautiful people in the world: good dress sense, great hair, kind of hippie chic. People would go to the club just to see how other people dressed. Sometimes, the girls would take their clothes off – mamma mia! But that was nothing unusual.

There was a small VIP area for the really famous – the princes and princesses. Instead of a VIP door with security, they gave 200 friends of the club a key for the back door. I would arrive in the car park with five or six people and take them to the back door and let them in. They would be so shocked, like ‘who is this guy?’ It was magic. I don’t like to say the old times were better – I move with the times – but believe me, it was special.  When I opened Mambo in 1994, Café del Mar was already so big, we needed to do something different. I had some English friends, Alan Warman and Tommy Mack, who were doing a party in Es Paradis called Mad Mondays. I invited them to the bar beforehand to eat and play some music. They came and brought their friends – and that was the birth of the pre-party.

Afterwards we had Roger [Sanchez], John Digweed, Sasha, Pete Tong – there have been so many. I remember that Frankie Knuckles used to do one-off vinyl edits to play at Mambo. Commercial success came in 1995. Everybody in the world was at Mambo. John Galliano, Kate Moss, Boy George. Mambo was unique then, because it was during the nu-age scene and that was the music we were playing. It became the thing — to go to Mambo, sit on the rocks, smoke a spliff and watch the sunset.

Now, more than ever, the DJs want to come here to play really different sets, to explore their artistic side. We let them do whatever they want, no pressure. The first time David Guetta came, he played some really classic sunset tracks that I loved. He was with his family and he was so nice. That’s the spirit – such a huge DJ, yet he comes and eats with us then plays in the bar. For me, that is Ibiza.

At Mambo, it’s always been about family. Some people have worked with us 15, 20 years.  In the beginning, I made my sons work here, and now they’re the future of Mambo. Keeping it in the family continues our style – it’s like a seal of quality. Of course it’s always difficult to take over from a father, but in Ibiza there are a lot of places where it works. Martin [Ferrer]’s son at Amnesia is amazing – he has a real talent; the family at Teatro Pereyra is beautiful; Ricardo [Urgell]’s children at Pacha, too – they’ll all take over from their fathers, carry on and maybe improve! We’re trying to do the same. Any project that we do, we do with that Ibiza soul.

There are some mega projects in Ibiza that I don’t like. I don’t think Ibiza should have anything to do with Vegas. A little bit of Miami, fine, but to go the way of Vegas is scary. We never expected Mambo to become what it is. But we were in Ibiza, in the sun. We had a lot of luck and we were kind to people. I love what I do. Sometimes I have a little stress, but every day I spend a couple of hours at the bar, I sit with friends, we tell stories, drink some tequila. I fall in love with Ibiza more every day. It is magic. Sure, we like to earn money, but we’ll never sell our soul to the devil. 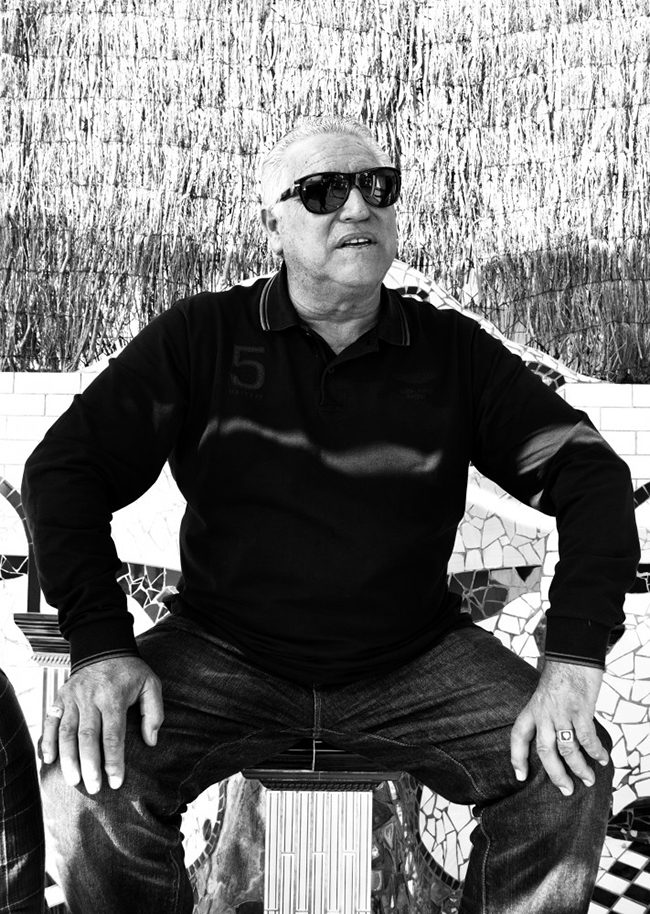