In 1981, UK new wave outfit Spandau Ballet embarked on their first international tour, playing to sell-out crowds in Paris, Rome, Milan and New York. That summer, Spandau also performed at KU in Ibiza, becoming the first electronic pop band from London to do so. It turned out to be a pioneering move that would result in a permanent bridge being raised between two of the world’s most iconic club scenes.

Before then, “nobody in London talked about Ibiza at all,” explains guitarist Gary Kemp. “Our manager, Steve Dagger, was interested in us playing in Ibiza at the KU club, which was being launched as the world’s greatest and most outrageous club. At the time, the Ibiza club scene at Pacha, Amnesia and KU was almost entirely a British-free zone. You’d hear Amanda Lear, Grace Jones, as well as German and Northern European disco playing, and the audience looked very 70s – long hair, Eurotrash.”

When the band visited KU the night before the gig they found 3,000 fans waiting to greet them, including the new Basque owners, who released a bull in the club to mark the occasion. “This was apparently some sort of traditional thing from near San Sebastian,” Kemp continues. “We couldn’t believe it. The bull ended up in the swimming pool; I guess it fitted in with the idea of a club of where anything could happen.”

The following evening, encircled by a media swarm and the great and good of Ibicencan society, Spandau appeared on stage at KU, lead singer Tony Hadley hovering majestically over the famous swimming pool. “By then, our sound was developing from a wholly electronic set into a funkier sound,” Kemp recalls. “We’d already recorded two white funk tracks, the first being ‘Glow’, the second ‘Chant No. 1’, which was released in the UK the week we played Ibiza.”

In the years following their 81 performance, Spandau, along with rival synth-pop bands like Duran Duran, exploded in popularity. At the same time, Ibiza’s reputation was also on the rise. “When we played at KU, many of our friends from the London club scene came with us, including various members of the embryonic Animal Night Life who were managed by Steve Lewis from Le Beat Route,” says Kemp. 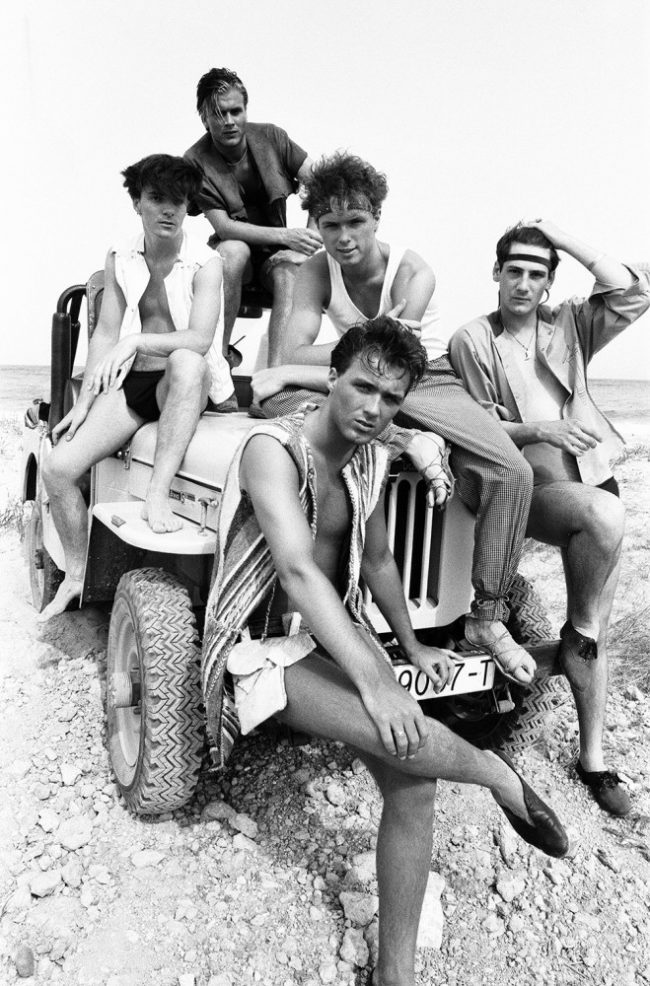 When the touring party arrived home, they spread the word about the amazing clubs on the island and the incredible beauty they’d seen, and they enthused over Pikes, the outrageous boutique hotel in the hills. After that, missionaries from the London scene began to visit Ibiza. The following year, Animal Night Life performed on the island, and in 86 Talk Talk would perform live at KU, the venue now seemingly a home from home for British new wave acts.

“In the early 80s, Paul worked for Rush Release,” Kemp says. “They were the first club promotional company to really understand the early 80s electronic funk scene; they worked every Spandau 12-inch. Paul has remained a good friend of the band ever since and he created a great 12- inch remix of ‘Gold’ to coincide with the 2012 Olympics.”

When Oakenfold, Danny Rampling, Nicky Holloway, and Johnny Walker travelled to Ibiza in August 1987, they discovered DJ Alfredo dropping Balearic beats inside a converted farmhouse called Amnesia. Inspired by what they had seen and heard, when the four friends returned home they set about revolutionising the UK dance scene, adding a little Balearic style and spirit to what had traditionally been a hostile space. Before long, acid house was everywhere: on the radio, in the rain. Both socially and politically, it was a cultural shift comparable to the psychedelic rock revolution of the mid 60s, and by 1989 the birth of the rave scene was being referred to as the Second Summer of Love.

Of course, Oakenfold’s explorative visit to Ibiza in 87 has been well documented, but this is the wider story of the events that transpired prior to 87 – dance music’s untold preamble, so to speak. So when Spandau take to the stage at the Ibiza Rocks Hotel on August 19, fans old and new can meditate on the fact that their polished new wave routine was one of the first connecting dots between the UK dance scene, the Ibiza club scene and what would later become known as acid house. Thirty years on, and with Spandau set to return to Ibiza for the first time since 1981, the enduring dialogue between the clubland cultures of England and Ibiza shows no sign of diminishing.

OAKENFOLD ON IBIZA IN THE 80s

“At the time, I worked for a company called Rush Release, the biggest independent record promoters in the country. And Spandau Ballet were on Chrysalis, so along with all the major labels, they would send records to Rush Release to promote and I would take records to DJs and promoters from there.

“We promoted Spandau along with bands like Culture Club, The Human League and Visage; we were the experts in that area.

I’d been to Ibiza a few times – my girlfriend at the time worked for a travel agent so got us cheap flights – and when I went to Ibiza I saw the potential, the same as Vegas. It was a destination to have fun.

“But in terms of work, the very first time I went was when I took Divine to Ibiza to perform at KU in 86. And while times have changed a lot since then, the island is still an international landmark in terms of electronic music – and has been for many, many years. A lot of people have come through that island and done incredibly well.”